Protecting People, Property and Our Way of Life 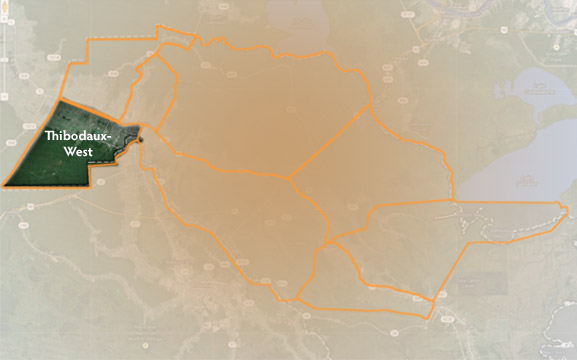 Leighton / Morvant /Welcome Pump and Levee System: This huge drainage basin, which also includes contributing drainage from portions of Assumption and Terrebonne Parish, encompasses a total of 14,074 acres, 12,678 of which are in Lafourche Parish. Overall the system includes approximately 40,000 feet of levees, most of which is in Lafourche Parish. This forced drainage system, which includes the Leighton, Morvant and Welcome pump stations protects approximately 4300 residences along with many businesses, schools and other infrastructure west of Thibodaux. The following individual projects have been identified in this sub-area:

St. Louis Canal: This project involves clearing the St Louis Canal from Cardinal Drive in Thibodaux to the Southern Pacific Railroad in Schriever. We have a signed Intergovernmental Agreement with Lafourche and Terrebonne Parishes addressing this project as most of this Canal is in Terrebonne Parish.. Lafourche Parish has cleared the adjacent rights of ways. The plan is to use one of the North Lafourche Marsh buggy Excavators, operated by the Parish to clear the St. Louis Canal as described. Clearing of the canal will improve drainage in the Acadia Woods area, as well as other areas in the City of Thibodaux. Currently, the Parish has cleaned the St. Louis Canal from the Percy Brown Road to the railroad crossing. Also, the NRCS has approved a clearing project with Terrebonne Parish for clearing from the railroad crossing going south. Currently, the canal has been cleared of debris south of Highway 648 (Percy Brown Road.) by the Lafourche Parish Government with the NLLD Excavator and parish Equipment. The City of Thibodaux has requested the canal be swept from Cardinal Drive passed Audubon Ave to Highway 648. NLLD is considering options for addressing this section of the canal and has engaged T. Baker Smith for project development and management.
Project COA 6100.54Z, Estimated Cost: $100,000.00

Acadia Woods Ring Levee, Detention & Pump: It is believed that one possible solution to the occasional street flooding in the Acadia Woods Area would involve providing a small ring levee system along the back edge of the western property owners with a ditch tied into a detention pond and a small pump station. Other options for improving drainage in the area are also under consideration by the NLLD. We have engaged T. Baker Smith for project development.
Project COA 6100.55Z, Estimated Cost: $850,000.00

Little Al Drainage Area Improvements: This 295 acre forced drainage system in the Thibodaux area protects 31 residences and a few businesses. The system has approximately 12,200 feet of ring levees providing backwater flooding protection. Forced drainage of the area is accomplished with a single pump station with 1-36” diesel fueled engine driven pump. Overall, the ring levees are insufficient in height and profile. This system was most recently threatened by the opening of the Morganza Spillway in the spring of 2011. Proposed improvements would include re-capping and re-shaping the entire ring levee, internal channel improvements and replace the existing pump station. The NLLD will be engaging an Engineer to develop the scope for this project.
Project COA 6100.56Z, Estimated Cost: $1,297,000.00

Other Non-Capital Projects in the Project Area: